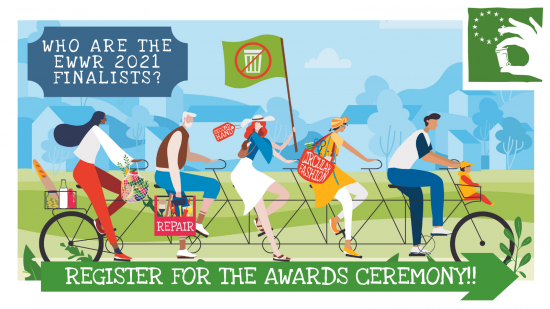 Time is up! The finalists of the EWWR 2021 edition are revealed!

The environmental experts in the European Week for Waste Reduction Awards jury convened online on 07 April to select the finalists of the 2021 edition of the campaign. The jury shortlisted 16 creative and impactful actions out of a total of 52 nominations. The winners will be announced at the Awards Ceremony on 9 June from 17:30 to 19:30 CET at the BEL building in Brussels .

It will also be possible to follow the Awards Ceremony online.

The sole winner will be announced together with the winners in the five categories above.

Do not miss the EWWR Awards Ceremony on 9 June to discover the winners! REGISTER AND SAVE YOUR SEAT!