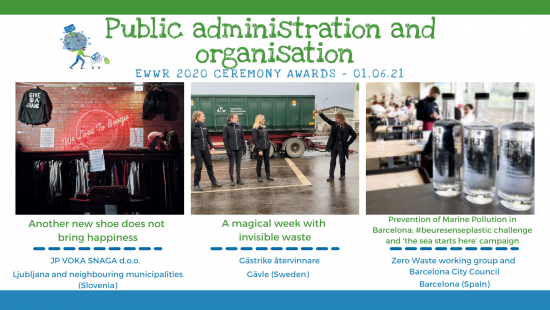 Let’s discover the three finalists of the public administration and organisation category!

The action addressed the problem of non-critical and excessive shopping in a holistic way: it did not only highlighted the problem of excessive consumerism, which leads to waste generation and resource consumption, but it also explored the psychological and sociological aspects of such behaviour. The psychotherapist, Jana Lavtižar, was involved in the action through interviews explaining that the reason behind reckless shopping is most common with people who connect the amount of things they possess to their self-worth.

This was also the occasion to involve and give visibility to several different Slovenian providers of second-hand items (clothes, shoes, prams, car seats, toys, etc.). The communications activities pointed out the background of cheap products, modern slavery, negative environmental impacts of fast fashion and showed alternatives/second-hand purchases, borrowing and/or sharing goods, offered guidance tips, and highlighted examples of good practices that could serve anyone else as an inspiration for change. In the end, all the results and information have been published in a web magazine named “Another new shoe does not bring happiness!”.

Magic is the special ingredient of this action. The digital campaign aimed at informing about invisible waste and inspiring on what everyone can do to reduce the large amount of invisible waste, with the special help of the magician Gabriel. Every day of the week, a topic (electronics, textile, food waste, furniture, etc.) was presented through exciting interviews, videos and inspiring good tips. The videos produced will be the educational materials for schools and other organisations involved in the action.

The action did not target any specific target groups but it tried to make the campaign broad to reach as many people as possible. The magician Gabriel was commissioned to spirit away the waste but, on the last video, it ended up that he conjured away himself proving that we can’t magically erase invisible waste: invisible waste does not disappear but everything remains. Our actions can be the real magic.

Watch some of the videos.

This Catalan action is composed of two campaigns. The “Drink without plastic” (#beuresenseplastic) campaign involved 92 organisations of Barcelona that committed to carrying out actions aimed at reducing or eliminating the single-use plastics for drinking. “The sea starts here” aimed to raise public awareness, informing the citizens that anything thrown down city drains, mostly small plastic items and cigarette ends, can end up in the sea, with the consequent impact on the marine ecosystem. The message was spread placing various metal plaques at drain grilles in emblematic city locations, saying “The sea starts here. Don’t throw anything away here”. An informative video describing the initiative was also produced, with the collaboration of various environmental information officers, who explained the message to the general public and distributed educational materials for young children.

The main aim of the campaigns concerned the transformation of bad habits, and this mission will be pursued by the day-to-day activities of those organisations. Furthermore, the plaques set up on the drain grilles will remain as a permanent fixture, as another feature of the urban landscape. Both campaigns can easily be reproduced in other territories. In fact, later on, the campaign was launched by other city councils in Spain (including Cádiz, Seville, Palma de Mallorca, etc.) and public water companies belonging to the Spanish Association of Public Water and Sanitation Operators (AEOPAS).

Watch the video on the #beuresenseplastic campaign (in Catalan)

Watch the video on The sea starts here campaign (in Catalan)

The jury member of this category is Tjisse Stelpstra, member of the European Committee of the Regions.