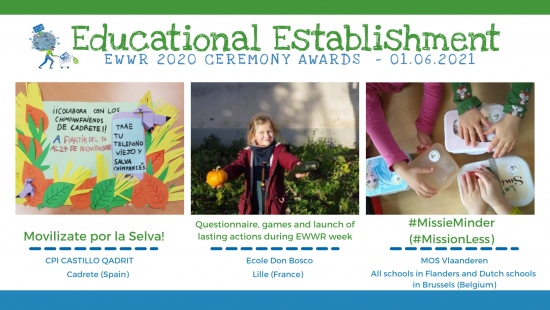 Let’s discover the three finalists of the educational establishment category!

The CPI CASTILLO QADRIT school is inscribed to the “Roots & Shoots” educational program that aims to inform and empower citizens to carry out actions based on respect and empathy for all living beings, the understanding between all cultures and beliefs and it motivates each individual to act to make the world a better place for everyone. “Movilízate por la Selva” campaign (Mobilise for the jungle!) raised awareness among school students, the “Chimpafriends” of Cadrete, about the impact of actions “to make the world a better place” and it encouraged the free collection of disused mobile phones.

During the EWWR, the students promoted the 3Rs focusing on the risk of the waste produced by old mobile phones. Together with talking about the topic through creative posters, they created a warehouse for used phones and tablets in the shape of a giant phone. After the collection, the students sent the electronic waste to recycling. As they collected more than 30 phones (112 in total, for a weight of 16kg), they won an annual Chimpafriend’s sponsorship, supporting one of the chimpanzees of Jane Goodall’s Chimpanzee Rehabilitation Center in Congo.

Watch the video of the action.

The kindergarten and primary school Don Bosco took the European Week for Waste Reduction opportunity to make long-term commitments in favour of the environment. After the first phase of analysis, through a questionnaire on waste management in school addressed to both the children and their families, a set of awareness-raising activities were carried out. For example, the pupils aged 6 to 11 and their families calculated their ecological footprint, while the youngest children (2-7 years old) watched documentaries on sorting and reducing waste and played games based on this topic (lottery, memory games…) and organised a recycling rally.

In this phase, each class elected eco-delegates. At the end of the week, the school organised the first eco-council meeting to propose the classes’ proposals and ideas. The actions most voted will be implemented soon, and more activities have been planned for the whole year.

#MissionMinder is based on the ‘Piraminder’ of Netwerk Bewust Verbruiken. Pira the rat was the “face” of #MissionMinder. For the youngest children, a short story was offered to introduce the topic of food waste. The schools were encouraged to participate by registering their actions. Furthermore, a set of inspiring actions was offered, divided into categories (Use what you have, Borrow of swap, Second-hand, Make, Buy leftovers with TooGoodToGo).

29 schools took part in the Mission and several actions were organised such as the collection of lunchboxes, environmental classes, collecting leftovers in the neighbourhood to feed animals, cleaning up the neighbourhood, questionnaires for pupils about the “ugly food”, etc. MissionMinder will be repeated annually on Black Friday, each time with the same character (Pira the rat) and recognisable elements (reductions linked to the pyramid) and colours, with the aim of “infecting” more and more schools over the years.

Read the Pira’s story (in Flemish).

The jury member of this category is Shimon Ginzburg, Project Evaluation Officer at Foundation of Environmental Education.

Curious to know the other finalists? See you next week with a new episode of Waiting for the Awards!