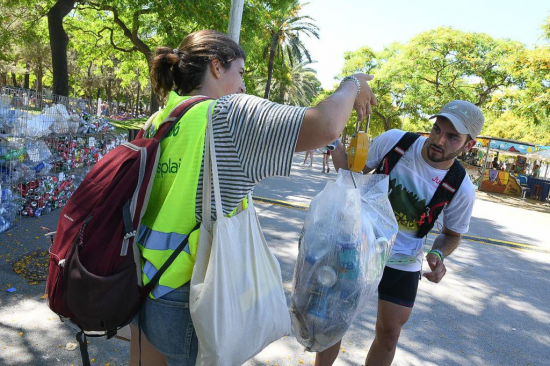 The Catalan Waste Agency (ARC) has been coordinating the Let’s Clean Up Europe (LCUE) campaign in Catalonia since 2014. In this 2022 edition, which started on 29 April and will run until 27 November, the participation in Catalonia growth has increased deeply, achieving 709 cleanup actions (64% higher than the previous edition). From these, more than the half took place during the high point of the campaign in Catalonia, which was from 6 to 8 May.

ARC co-organised two main actions in the framework of LCUE. The first one was the 4th Ultra Clean Marathon, in partnership with Xarxa Conservació de la Natura and Barcelona City, where 23 teams were plogging over 63 km for an environmental organisation on 11 June. The second one will be the 2nd edition of a cleanup, promoted by the Euroregion Pyrenees Mediterranean, taking place simultaneously on 7 October in three natural spaces, in Catalonia, Occitania and the Balearic Island. Until this point, there have been 45,900 participants in this edition, most of them being students, thanks to a huge increase in the participation of primary and secondary schools.

As reported by 66% of the action developers of 2022, the amount of waste collected reached up to 93 tonnes. Regarding the weight, a 13% of the waste collected was classified as plastics packaging, bricks and cans; a 9% was glass packaging; a 4% was paper and cardboard; a 34% was debris and the remaining 40% was under the category of waste.

It is not our litter, but it is our Home, and we need to cherish it all together.