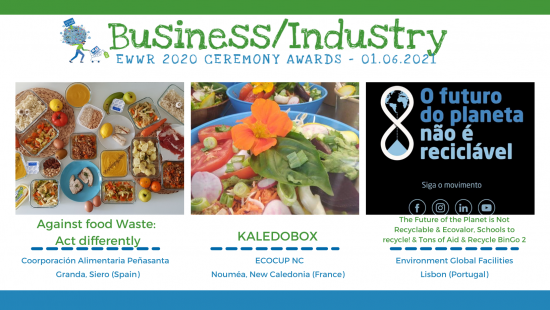 Let’s discover the three finalists of the business / industry category!

Furthermore, CAPSA acted on their own industrial processes and it generated a very big impact investing into TOC (Total Organic Carbon) equipment for the continuous control of pollution. The target was to reduce the generation of waste in the production process and to avoid having some water leakages in the network of wastewater.

Watch the video about the activities developed by CAPSA during the 2020 EWWR.

This company based in New Caledonia launched the Kaledobox during the EWWR, which are lasting and recyclable lunchboxes made of innovative materials. The lunchboxes are made from an innovative blue or eggplant coloured material called PBT GF30 (70% PBT plastic and 30% glass fibre). It complies with EU food hygiene standards concerning the absence of migrations of the product’s properties during cleaning. At the end of its life, it can be broken down into granulates and recast to create a new object. The action promoted the circular economy benefits as well since the lunchbox is based on a deposit-payment system.

During the European Week for Waste reduction, 200 Kaledo boxes were offered to customers in 7 takeaway restaurants and two awareness-raising events were organised at the University of Nouville campus to promote the lunchboxes and the circular approach of the deposit-payment system.

The goal of The Future of the Planet is Not Recyclable campaign is to move the citizen to take action and be part of a collective movement, through the adoption of appropriate environmental behaviours in the daily waste management and by assuming their role as resource manager, in a value chain of which EGF, a company leader in waste treatment and recovery, and its concessionaires are part of.

The advertising film shows what happens to waste after being separated at the eco points and gives face and voice to thousands of workers in this sector of activity. In addition, the role of municipalities and organizations, which are invited to promote this campaign in their regions, was also highlighted. Regional events and participations were also promoted, as well as environmental education actions on the ground, such as the Ecovalor Program and Recycle Bingo. The multimedia advertising campaign, in various national and regional media – press, radio, billboards and television -, highlights the actions integrated into the programs The Voice of Portugal, Big Brother and Manhãs of Rádio Comercial/Mornings of Radio Comercial.

All the videos are available in Portuguese.

The jury member of this category is Stefanie Sieberer, Policy Advisor at EUROCHAMBRES.