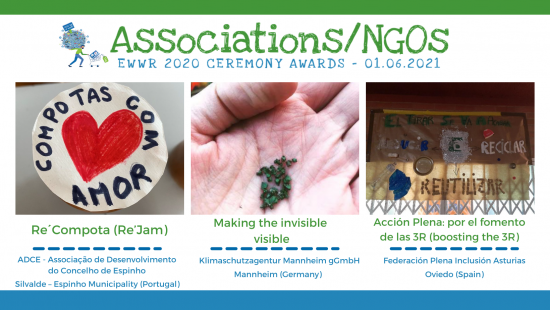 Let’s discover the three finalists of the association/NGO category!

Plena inclusión Asturias is an organization that represents people affected by intellectual and developmental disabilities and their families. The action followed two approaches. The first one focused on spreading the message of good practices implemented in the office based in Oviedo through several videos promoting the 3Rs.

The second approach focused on spreading the EWWR among the members of the association, boosting them to implement actions related to environmental care. Due to the Covid19 restrictions, many of them could not participate but the entities in Sant Martín del Rey Aurelio was able to organise some workshops during the week.

During the EWWR, the Mannheim Climate Protection Agency highlighted various everyday situations and actions in which waste is produced but is not visible to the naked eye. Each day, a different topic was presented on social media (Facebook, Instagram and LinkedIn): 1) Microplastics in artificial turf; 2) how microplastics enter groundwater while doing laundry; 3) Rubber abrasion on roads; 4) Microplastics in cosmetics; 5) Buying unpackaged: Waste behind the storage door.

This social media campaign was the opportunity to make invisible waste visible, and to show solutions to avoid the production and the distribution of the invisible waste.

Watch the video in German.

The action Re’Compota (Re’Jam), had as its final objective, to make several jams and marmalade to offer to the Social Canteen of Espinho Parish. In mid-March 2020, due to the COVID 19 pandemic, the beneficiaries stopped dining in the canteen space for safety reasons, and the delivery service became take-away, while it kept only for situations of greater dependence. Between March and June, the number of users covered by this support increased significantly, approximately 140 meals were served daily. Through the establishment of partnerships with fruit shops, markets, grocery stores and private individuals, it was possible to collect several kilograms of fruit, non-saleable, which was promptly given for the realization of this action. Thus, it was possible to combat food waste, raise awareness of donation, help others and reuse materials.

After making, the jams were placed in glass jars (reused) and the marmalade in packages of ice cream and others (reused). The fruit leftovers were placed in the compost bin in the institution to be used as fertilizer in the association’s organic garden. To complete the process, the labels for the bottles/ packaging were prepared reusing supermarket magazines and miscellaneous paper.

Watch the video of the action in Portuguese.

The jury member of this category is Piotr Barczak, Senior Policy Officer for Waste at European Environmental Bureau.